If you have ever watched a female softball game, you have probably noticed that most players have particularly long hair. There are a couple of reasons for this phenomenon which we will discuss in this article.

While some players may not like to admit it, many of them choose to wear their hair in a certain style because it makes them feel pretty. Wearing their hair down in a style that is both practical and stylish makes the players feel confident and beautiful.

Style has always been a part of softball. In the early days of the sport, players would often wear their hair in a style that was practical and allowed them to play the game. This often meant wearing their hair in a ponytail or bun. As the game has evolved, so has the style of the players.

It is Easier to Maintain#

Long hair is much easier to take care of and style than short hair. This is especially true for softball players, who often have to spend a lot of time in the sun and heat. Long hair can be pulled back into a ponytail or braid, which keeps it out of the way and helps prevent it from getting in the way or getting sweaty and tangled. 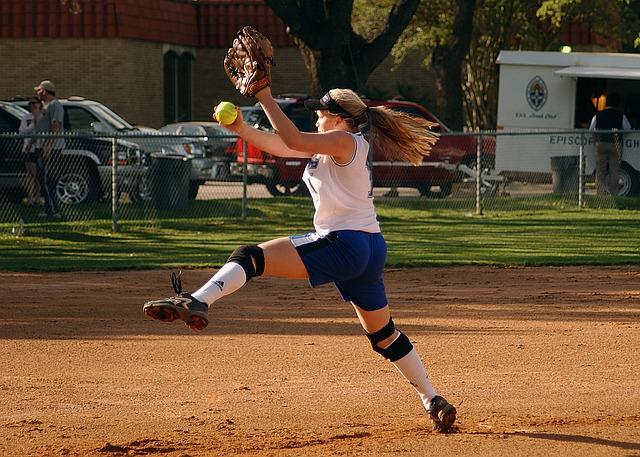 Gender stereotypes associated with females that participate in sports usually portray them as less feminine or are often assumed to be lesbian. Whether knowingly or not, females often combat these stereotypes by conforming to more “traditionally feminine standards”, such as wearing their hair long.

This phenomenon of conforming to more feminine standards is not exclusive to softball players, females that play any sport often feel the need to display their femininity to be seen as “normal”.

A recent study has found that to feel comfortable and included, female athletes often dress and behave in ways that display their femininity. This is especially true for younger athletes, who have not yet developed a strong sense of self and are still trying to figure out who they are.

However, even as they get older, female athletes still feel pressure to conform to feminine standards. They are often told that they need to be more ladylike on the field and that they should avoid being too aggressive or masculine. They are also told to focus on their appearance and to make sure they look good to be seen as attractive and feminine. This pressure to conform to feminine standards can be very damaging to female athletes, as it can make them feel like they have to sacrifice their style and preferences.

In another study of young female athletes, it was found that many of the participants felt the need to “prove” their femininity to be taken seriously as athletes. In other words, they felt the need to dress and behave in a more traditionally feminine way to be respected as athletes.

Stereotypes are also to blame for women's overrepresentation in softball.

The hair of female athletes and their participation in sports does not reflect on their sexual orientation, femininity, or lack thereof. Although, society has a hard time grasping this idea. Female athletes should not have to worry about their hair or how they look to be taken seriously. They should be able to focus on their sport and their performance.

Unfortunately, society’s stereotype of female athletes often leads to discrimination and even violence. In some cases, female athletes have been physically assaulted because of their perceived sexual orientation.

This is an injustice that needs to be stopped. It is time for society to embrace female athletes for who they are and not what they look like. We need to celebrate their accomplishments and stop judging them based on their appearance.