Fastpitch and slow-pitch are two variations of softball. Fastpitch is the more popular of the two. Appropriately, often unacquainted, most people that refer to softball speak of the fastpitch variation. Many people couldn’t tell the difference between the two when spectated. In this article, we will explain what sets the games apart.

As the name suggests, the games have different pitching styles. In fastpitch, the ball is thrown by performing a circular motion and releasing the ball between the hip to knee level (often referred to as a windmill). This pitching style allows players to throw the ball at speeds reaching 65 mp/h (~105 km/h) or more.

In slow-pitch, the pitcher pitches the ball by performing an underhand upwards motion resulting in a high arc ball trajectory. This pitch is significantly slower compared to the windmill pitch in fastpitch. Some tournaments have a minimum height requirement the pitch must attain for it to be considered legal, often set to 12 feet (~3.65 meters). The pitch is often compared to the Eephus pitch performed in baseball, with the notable difference in the overhand throw.

Bunting is a sacrifice play performed by holding the bat in front of the plate and adjusting the bat’s position accordingly to tap the ball. By bunting, the batter is “sacrificing” themself to advance a runner to the next base.

Bunting is a common offensive tactic in fastpitch softball, a good execution of which can have a pivotal impact on the game’s result. However, in slow-pitch softball, the practice of bunting is prohibited, and due to the slower speed of the pitches, its practicality is debated. 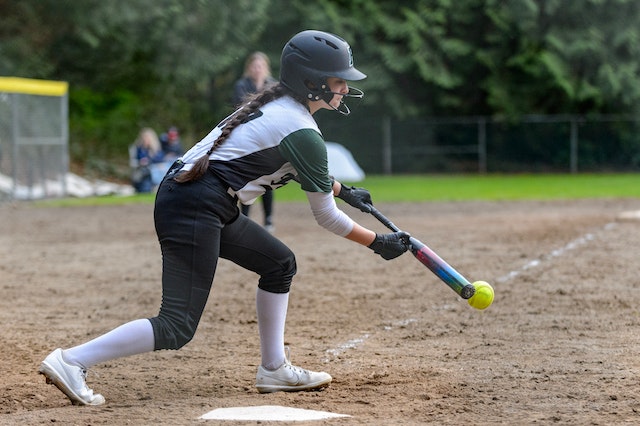 Contrary to what you would expect, the extra outfielder doesn’t make the game go faster. Innings in slow-pitch last longer when compared to fastpitch softball. This is often attributed to the pitching style, which results in a lower strikeout rate.

Leading Off and Stealing Bases#

Slow pitch rules are generally less strict than fastpitch rules and are typically geared toward recreational play. As a result, slow-pitch rules are not as standardized as fastpitch softball rules, so you can expect a little more flexibility; rules will often change depending on the league or tournament. This means that some of the differences outlined in this article may not hold without exception.